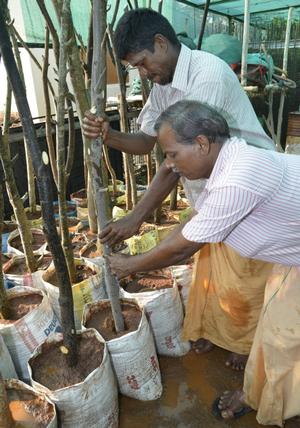 R.S. Arjunan sold tea in trains to make a living. When his son died, an old man advised him to plant trees to get rid of bad karma. In seven years since then, the 42-year-old from Tirunelveli has planted 35,000 trees across Tamil Nadu, and he wants to plant thousands more.

“Our aim should be to green the State enough to restore its ecological balance, its rainfall. We should not have to beg other States for water,” he says. But as any tree planter knows, a sapling takes between three to five years to become a tree. Do we really have so much time to wait? asks Arjunan.

Arjunan lops off a branch that is around six feet in length and plants it in a sack of tightly packed soil. Since the branch has a sturdy bark, it is safe from cattle. Saplings are often lost to cattle, or they need expensive tree guards to protect them.

Within 90 days, the branch grows into a sturdy young tree, ready to be transplanted. Arjunan declares, “You will observe a year’s worth of growth, every month. I have done it. An eleven-year-old can do it.”

According to him, an individual can have 100 trees up and standing in just three months. In about a fortnight, the branch puts out new shoots and leaves.

It takes no more than one litre of water a day for a tree for 90 days. “Imagine the time saved,” he says. Arjunan has made some investments that give him a fixed return every month that helps him in his mission. It is difficult, he admits, but he has no regrets.

He is willing to work with corporate houses and real estate developers who want trees in their properties. He says he will look after them for three months till they are fully grown. Almost any specie can be propagated this way, he asserts.

Greening Tamil Nadu is Arjunan’s only dream. “Once I do that, I am ready to die,” he says.

“If I am reborn as a bird or a creature of a forest, I will have a tree to come home to.”

Arjunan can be contacted at 97903 95796 for the technique and the list of trees that can be grown using this method. Also, learn more about his mission at http://www.chepparaivalaboomigreenworld.com

More from this Theme(s)