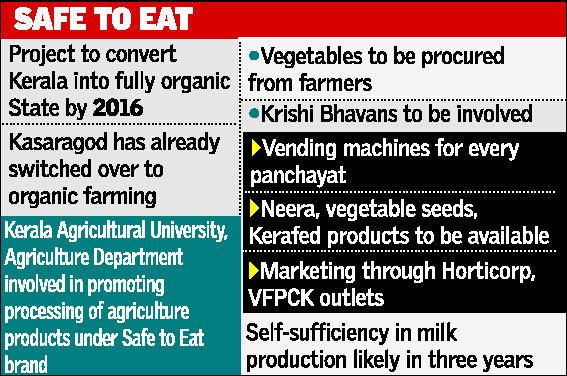 The government has initiated efforts to promote organic farming in all Assembly constituencies.

Minister for Agriculture K.P. Mohanan said here on Thursday that the initiative was designed to encourage farmers to switch over to organic methods of cultivation, under a project to convert Kerala into a fully organic State by 2016. Kasaragod district had already switched over to organic farming in the pilot phase of the project.

Addressing a press conference after a meeting to review the performance of public sector undertakings, Mr. Mohanan said the agriculture sector in the State had registered a Gross State Domestic Product growth of 5.26 per cent over the last year. The production of paddy went up to 5.376 lakh tonnes though the acreage of 2.148 hectares showed little increase. The productivity of other crops such as coconut, cassava, mango, pineapple and other fruits and spices, including pepper, ginger, and turmeric, also registered an impressive growth. The domestic vegetable production had gone up to 11.9 metric tonnes.

The Minister said efforts were on to procure vegetables from farmers through Krishi Bhavans and market them through outlets of Horticorp and Vegetable and Fruit Promotion Council Keralam. Simultaneously, Kerala Agricultural University and the Agriculture Department were involved in a drive to promote processing of agricultural products under the “Safe to Eat” brand.

The government, he said, was planning to install vending machines in every panchayat to dispense neera, vegetable seeds and products manufactured by Kerafed. The project would be implemented by the departments of Agriculture and Panchayats. The daily production of neera was expected to go up to 20,000 litres by February with the commissioning of new plants by the Coconut Development Corporation at Aralam and Elathur and the KAU campuses at Vellanikara and Vellayani.

Mr. Mohanan said Kerala was expected to become self-sufficient in milk production in another three years. “By that time, we will have added 6,00,000 milch cows to the domestic bovine population, raising the milk production potential to 60 lakh litres.”

Officials from 20 public sector units participated in the review.

More from this Theme(s)