Santosh M Padwal is a storyteller, always in shorts and from Mumbai.  According to him, this is it and his introduction ends here. Well, he had also travelled 70,000 km in 13 months all over India doing photo/video documentation. He also knows a lot of cooperative games and has been associated with Shikshantar, Udaipur and was a Khoji in Swaraj university in the very first batch. Here are the excerpts of the talk we had with him: 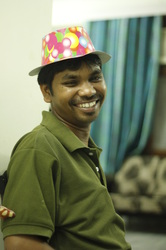 Tell us about your life journey in brief?

I am basically from Mumbai, studied till 10th. Post that I spent 5 years working as sales executives in max york life insurance, airtel, vodafone etc. and then as a Wardboy. After that I got a chance to join Swaraj University (It follows a self designed learning philosophy with no degrees and no exams) which completely changed my life and my thought process.

What prompted you to start filmmaking?

Well, I didn’t have much interest in filmmaking initially but I had an inclination towards camera. Whenever I used to get a camera, I used to try clicking pictures from various angles etc. Slowly from photography, I learned filmmaking and then I learned editing on my own. At that time, I got my first opportunity as a filmmaker from Kisaan swaraj yatra which I took and thats how I became a filmmaker. Post that yatra, got another projects because of my work including projects from Jan Satyagraha. In the meantime, I also attended mentorship sessions form Abhivyakti – Nasik etc. After all these experiences, I realized that film making is a very strong tool to communicate stories and with youtube and other social networking sites, reach of a video/ film has increased. So, I decided to pursue it full time. 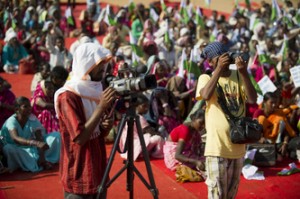 What kind of films have you made?

I like to make documentary films. It helps me in telling stories of people who are doing real good work. In the process, I also come to know about the challenges people are facing, how they are overcoming them etc. I have made films on Jan Satyagraha, Om Creations, Cycle marathon initiatives etc. Somehow fiction films don’t give me that kind of kick. In future, if I get a chance to make a fictional film, it would be a docu-fiction only.

What is your dream/ vision?

My Vision is that documentary films should get the same (if not more) recognition like fiction or feature films. I would like to work in this regard on how to make documentary films more entertaining and interesting.

What difficulties you face as an independent filmmaker?

I can make good films with my simple camera also, but when you have to execute a project, there are many things you require and there is a project cost involved which many people don’t understand. You need equipments, there is a travelling cost involved, if you are shooting in a village you need lights so it becomes very difficult to manage project cost. Having said that, its all part of the game and thats how you grow as an individual and and as a filmmaker. 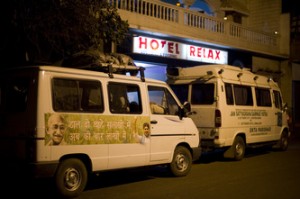 Once we were travelling for shooting and we took a wrong turn and reached a place full of mines. Very big vehicles were looking so small there. So we thought of shooting that place. We hardly shot for 2-3 min and suddenly a group of 40-50 people came running towards us. We got so scared that we all sat in our car and drove as fast as we could. If they would have caught us, they must have broken our camera else our bones

What advice you’d like to give to someone who is interested/newbee in filmmaking?

I will not call it an advice but my belief is that when you are making a film, whether its a fiction, documentary or anything else, the audience should connect to it. They should have ‘some’ feeling after watching the film. Also, you must financially sustain yourself, and you must have a plan for it.